Winter in Southern California isn’t really winter I suppose. The high today was a pleasant 62F but the wind made it feel rather cold. I’ve just finished my ~35 minute run and suffice today I did pretty terribly. I’ve never done too well with running in colder weather. I prefer running in sunny, warm weather (70-85F is awesome). I find that my lungs don’t like to take in chilly air and at the end I often feel like I’m 10 years old again, having an asthma attack. Of course, it isn’t nearly as bad as an asthma attack but nonetheless I find myself asking why I went on that run.

I also couldn’t have chosen a harder route to run around here for my first run. The route I was planning to run on had a lot of students walking to and from their parked cars so at the last minute I decided to turn down the street to avoid them. It all started out great since the road was flat and I was still pretty warm from being inside the apartment. I was doing an 8 minute run, 2 minute walk up until I hit the vehicle barrier for the road down the cliffs. After jogging though the pedestrian opening (how someone larger than average can squeeze through them is beyond me, I don’t think they planned for that when they built it), it was literally all downhill from there. 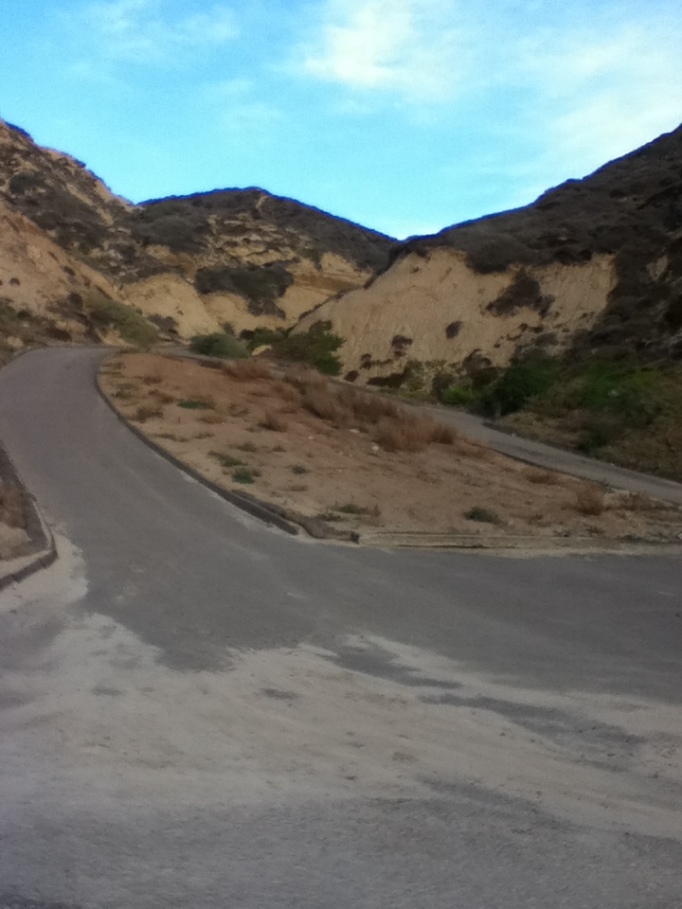 Part of the giant hill

I don’t really know the incline of the hill but it is pretty steep and made for a nice leg workout to keep myself from running too fast around the corners and face planting into someone running up hill. There were a few crazy longboarders sliding down the hill as well. I admire their bravery and skill as I’m a klutz on mine. At the bottom of the hill is a familiar sight for me: the beach. I ran down this way once before, last year. I was in better shape and the weather was warmer and it’s actually a fun run…if you don’t mind climbing back up.

Small waves today, few surfers out there but I don’t think they’ll be catching any big ones today.

I walked my way up after running up the hill for a minute and a half. Two other ladies jogged past me as I stopped to enjoy the view once more. By the time I got back to the top, the two girls were catching their breath and stretching while two other longboarders welcomed their friend back to the top as they prep to go down the hills once more (the wheel marks on the turns tell you that these riders really enjoy the gnarly hills here).

As I managed to catch my breath and my throat began to hurt less, I started running back to campus. My feet protested as first but got back into the rhythm. All in all a decent first run. I should really have picked a flatter route to start out with, especially since I know I don’t do well in the cold…

The sun starting to seat (at around 4pm!)